Just Ants Under the Magnifier 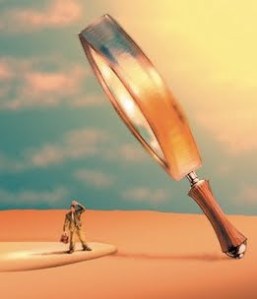 Life is a test. And God is the Great Examiner. He places us in various circumstances and situations to see how we’ll conduct ourselves in the midst. He watches to see whether we pass or fail. If we do the right thing in a given situation … for example, if we don’t get wasted on Friday night, and if we do help that old lady across the street, always tell the truth, never steal anything, don’t have sex with the wrong person or at the wrong time, memorize our weekly Sunday School Bible verse, never drop an F-bomb, and give enough money to the church or charity, etc., etc.; then we get a higher grade … a passing grade, and we get to go to Heaven when we die; where there will be no more testing going on. That’s pretty much the way it is. The Bible says it, I believe it, and that settles it.

And everything you just read … is 100% cockamamie bull$&!*. (By the way, does anybody know what “cockamamie” actually is?)

In fact, the Bible (when taken as a whole) doesn’t say that, and I don’t believe that, although I’m also pretty sure that that still doesn’t settle it for many. Honestly, I myself have often thought … and even said in the past, that life is essentially a test. But if it really were so, doesn’t that sound a bit boring and sterile … or worse yet, kind of cruel? Who’d be up for that? Really? It brings to mind that mean kid with the magnifier frying ants on the sidewalk … where God’s the mean kid, you & I are the ants; and he’s just watching, waiting, and toying with us to see how much heat we can take before we either burn to a crisp or run away as fast as we can.

And honestly, isn’t that exactly how many of us have viewed life and God in our experience? And if so, is it any wonder that most of us spend the greater portion of our existence running to get away from him as fast and as far as possible … just like the ant on the sidewalk, bolting for the tall grass with his hair on fire (literally) to get away from the mean magnifier kid? And if so, who could really blame us? The story’s as old as Genesis. And make no mistake, it’s my story, too.

But is it actually so? Is life truly like that? If we are to believe so, then we must also assert that this overseeing God is a blatant hypocrite. After all, isn’t it he who commanded that we “do not put the Lord your God to the test,” as stated in Deut. 6:16 & Lk. 4:12? You’d also have to assume that God is a lot like the kid on the sidewalk … mean, aloof, uncaring, cruel, heartless, out of touch, and just kind of jacking with us. To be sure, life is very often unbearably difficult (gross understatement), and certainly feels like a test … or like a magnifier beating down on us in the hot sun. But who’s actually holding the glass? Well, if you believe in this kind of stuff, some might say the devil … or some incarnate force of evil. If you’re political, you might say it’s Obama … or John Boehner, or “the Man.” And maybe it is one of those or many others we could cite, but I’m pretty sure it’s not God. I think God is actually more likely to be the mean kid’s dad who sees what’s going on and puts the little brat in time out while he (Dad) gently picks up the injured, exhausted, and bewildered little ant, and sets him free in the cool grass of the lawn … hopefully to live a full and meaningful little ant life. After all, would a God who wishes not to be tested himself, then turn around and inflict the same on another? I think not. I certainly hope not! Furthermore … and here’s the real crux of the matter … he has no need to do so anyway. He already knows we’d fail the test … just like the ant couldn’t possibly outlive or outrun the heat of the magnified sun. The task at hand (and the mean kid holding the glass) is just too big … too hard … too monumental … too cruel for him to overcome. And God knows the same of us. He already knows we’ll fail the test miserably. In fact, he outright tells us so … right there in Psalm 103:14! “… he knows how we are formed, he remembers that we are dust.” Life, and all it will throw at us is just too big, too heavy, too hard, too overwhelming, and too hot for us to prevail. We absolutely, positively will fail in one or more of the major areas of life … marriage, parenting, sexuality, finances, moral purity, ethics, compassion, and so on. We will succumb at some point in our journey to envy, greed, lust, anger, gossip, selfishness, faithlessness, discouragement, fear, and many more. And not just once or twice. We’ll fail these “tests” over and over and over again … more times than we can count! And God already knows that about us. What need has he to test us of what he already knows?

Then what to make of it? What to make of him? Thankfully, he provided that answer on an incredible cheat-sheet that he provided for us before this great examination began. Just before he confided how he remembers “how we are formed … that we are dust” (i.e. vulnerable to all manner of storms, drought, wind, flood, heat, cold, disease, calamity, being trampled under foot, etc.); he also offered the following: “The Lord is compassionate and gracious, slow to anger, abounding in steadfast love. He will not always accuse, nor will he harbor his anger forever; he does not treat us as our sins deserve or repay us for our iniquities. For as high as the heavens are above the earth, so great is his love for those who fear him; as far as the east is from the west, so far has he removed our transgressions from us. As a father has compassion on his children, so the Lord has compassion on those who fear him … (and why?) … for he knows how we are formed, he remembers that we are dust” (Ps. 103:8-14).

And that … unlike the first paragraph of this piece … is no bull.

This entry was posted in Uncategorized. Bookmark the permalink.

10 Responses to Just Ants Under the Magnifier